You Can Influence ICER Recommendations, You Just Need the Right Evidence

It’s difficult to dispute the findings of an advisory group which is widely accepted as the authority, especially when it comes to evaluating the value of different therapeutic interventions. The cost of drugs in the US has been a hot button topic in recent years, so healthcare industry stakeholders are increasingly looking for objective evaluations of therapies.

Over the past decade, one of the rising authoritative bodies in the healthcare industry has been the Institute for Clinical and Economic Review (ICER). ICER is a US non-profit organization founded in 2006 as an “independent and non-partisan organization that objectively evaluates the clinical and economic value of prescription drugs, medical tests, and other healthcare delivery innovations.”

ICER does not make reimbursement decisions, but instead provides information to payers and other healthcare stakeholders from which those determinations are made. Although the organization holds no official mandate, the influence of ICER has continued to grow. A recent survey of U.S. payers found that three out of four had used ICER recommendations to inform their formulary and reimbursement decisions.[1]

The organization posts draft reports of their recommendations and provides an opportunity for public comment and stakeholder input, but challenging an ICER recommendation can be difficult without the right evidence. Conversely, failing to challenge an ICER decision can be costly.

Based on previous ICER reports, when a pharma product goes through an ICER assessment, there is an extremely high chance that the manufacturer will face a price cut recommendation, and almost half the time the recommended reduction will be greater than 60%. That was the case in 2018 when ICER evaluated 34 interventions and recommended significant pricing cuts in all but one of them. Similarly, in 2019, albeit with a smaller sample size (N=8 interventions), ICER recommended that 88% of interventions be discounted, with a mean price reduction of 49%.

Mitigating the results of a cost cut recommendation

What is a pharmaceutical company to do when faced with an ICER assessment that can affect its pricing? One path is to challenge the decision during the designated public input period. Getting ICER to improve its evaluation, however, requires presenting significant and compelling data that bolsters the manufacturer’s case.

Over the years, we have partnered with several large and small pharmaceutical organizations to support their ICER evaluation strategy. To help life science organizations present the evidence needed to effectively challenge ICER assessments, we have developed independent economic models, including cost-effectiveness (CE) and budget impact models, to evaluate ICER’s methods and model programming.

Why independent economic models are crucial

It’s not always prudent for manufacturers to rely on the CE findings as determined by ICER. Whether ICER is conducting a CE analysis or some other group (e.g., manufacturers), much thought goes into the analytic design of the CE model, including the model structure, assumptions, input parameters and values, and scenario analyses, among other unique aspects; a model’s subjective design, therefore, may vary between research groups potentially leading to differential results.

This was the case when we recently compared the valuations of ICER and non-ICER CE findings2. Specifically, we investigated how often ICER and non-ICER researchers (i.e., life science companies, academic organizations, government agencies) aligned on the value of interventions, as categorically determined by ICER (e.g., <$50,000 per QALY gained equals high value for money). We found that, in nearly three-quarters of our investigations (N=14, ranging from 2015-2017), a more favorable valuation would have been recommended if the CE ratios determined by non-ICER researchers had been used for decision making instead of ICER’s CE ratios. Given these findings, it’s imperative for manufacturers to develop, or work with outside groups to develop, independent CE models to appropriately challenge and respond to ICER evaluations.

Preparing for an ICER evaluation with independent economic models

Aggregating the data we derived from our independent modeling analyses illustrates significant positive differences from ICER’s base case scenarios. The results of both CE and budget impact analyses demonstrated that in alternative scenarios, we were able to produce more favorable results for the manufacturers compared to ICER’s base case.

We programmed additional inputs or assumptions, not included in ICER’s methods, centered around persistence/non-persistence/adherence, efficacy rates, and excess mortality rates, among others. When comparing the results from our independent model using our input values or assumptions to ICER’s results, we estimated the percent difference in CE ratios between our results and ICER’s base case results (Figure 1).

As an example, we found that if our treatment efficacy values were used instead of ICER’s efficacy values, CE ratios would range from 17% above ICER’s findings to 169% below ICER’s findings (mean difference of 13% below). As you can imagine, these findings were instrumental in discussions with ICER during ICER evaluations.

Figure 1. Percent difference between our CE ratios and ICER’s base case ratios 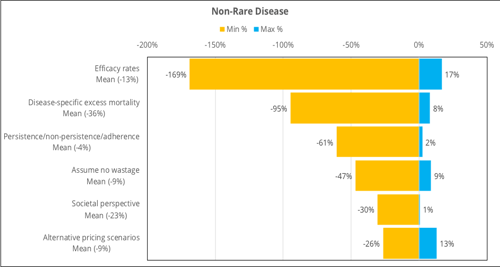 Challenging ICER evaluations is difficult but leveraging an independent evaluation can produce the evidence which ultimately leads to changes within ICER’s final reports. With evidence from ICER’s assessments factoring more and more into final pricing decisions, a negative review can put your organization at risk – doing everything you can to get an accurate evaluation is more important than ever. To learn more about how we can help you prepare for an ICER evaluation, reach out to us at modelingandstrategy@panalgo.com.

To read the full Panalgo analyses, click here to download our white paper on how best to prepare for an ICER evaluation.