As an organization that evaluates the comparative value of medical technologies, the Institute for Clinical and Economic Review (ICER) is no stranger to ruffling the feathers of the life sciences industry. Its track record of declaring that drugs are overpriced says it all (see our recent blog post for a fuller description). More recently, ICER announced its planned assessment of unsupported price increases (UPIs) for drugs. This marks a rare but not unprecedented step of going beyond its typical scope of evaluating specific interventions or therapeutic areas. In doing so, ICER is stepping into one of the most debated topics in healthcare in recent years. ICER will release the final UPI report on Tuesday, October 8, 2019

Why this, and why now?

In the wake of recent news about price increases for out-of-patent medical technologies such as epi-pens and insulin, state policymakers have been scrambling to take action. States especially have sprung into action, passing legislation to request price increase justifications from manufacturers and even taking legal action (Luthra 2017). Until now, there has been no national coordination of these state-level efforts, but there is increasing interest in aligning the focus of these acts of legislation. To this end, a number of state legislatures have contacted ICER seeking to identify treatments with a combination of substantial price increases and minimal justification for the increases. In response to these requests, ICER promises to conduct its first unsupported price increase analysis (ICER 2019).

What has ICER done so far?

Thus far, ICER has released a detailed description of their methodology. The description lays out exactly what types of price increases they will analyze, and how they define an “unsupported” price increase (ICER 2019). Between now and their planned October 2019 publication of their final report, ICER does not intend to publicly release any interim findings in an effort to minimize unwarranted naming-and-shaming of companies and products.

Instead, ICER plans to directly reach out to manufacturers to give them a chance to provide any other supporting information. Additionally, ICER will send preliminary drafts of its analyses to these manufacturers for confidential feedback. ICER will not share drafts with the general public until it releases the final assessment.

How will ICER identify drugs with substantial price increases? 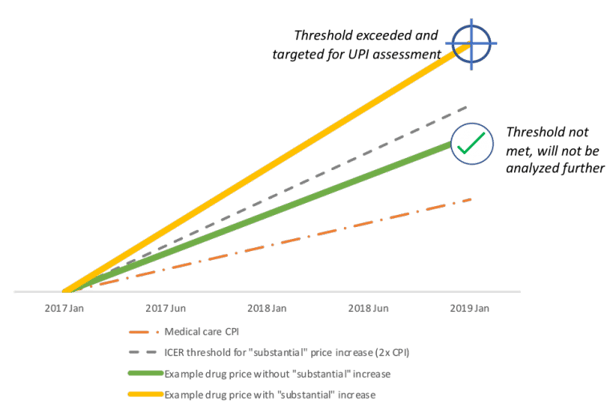 As shown in the figure above, ICER will target drugs for further UPI assessment that exceed the threshold for “substantial” price increases. Drugs that both exceed this threshold and are among the top 100 sellers in the US will then be reviewed for their impact on healthcare budgets and populations with limited treatment options.

In addition to this search for “big hitters”, ICER also plans to search for drugs that are priced close to the threshold, seen as unfair, or are at risk of significantly impacting individual patients or populations.

If a treatment’s price increase does not come with clinical evidence meeting the threshold for moderate quality, ICER considers the price increase as “unsupported by new clinical evidence”. There are no plans for full economic or cost-benefit analyses, and the current focus on top-selling drugs and those flagged by public input is by no means exhaustive.

In reviewing ICER’s methods, there are two specific areas of concern: how the drugs to be reviewed are selected, and how the quality of the evidence is measured.

ICER approaches its selection of drugs to be reviewed in a number of ways. The way drugs are prioritized leads to the risk of missing out on smaller subpopulations that would be especially hard hit by large price increases. Most of the drugs picked for review – in fact ten of the thirteen chosen – rely on a combination of price increase and budget impact. All other drugs that may not have met these criteria are relegated to three other review “slots”, and must be nominated by public input. These last three drugs are selected are based on broad-brush categories rather than a clearly defined algorithm, with little detail on how such considerations as “important affordability implications” and “fairness of price increases” are defined. This combination of minimal accommodation and unclear methods is concerning.

The question of how evidence quality is measured is also controversial, given the inherent risk of bias in how a subjective measure like “quality” is interpreted by reviewers. The published GRADE methodology that ICER cites as its guidance is conservative in its preference for large controlled trials as what counts as “strong” evidence. The risk of relying on such a methodology is that it is less likely to put weight behind smaller-scale studies or sources beyond RCTs, de-emphasizing supportive evidence that is more preliminary.

Along with clarifying the details of ICER’s methods, the protocol reveals limits to the planned analyses. Although ICER calculates presence and quality of clinical evidence, typical economic analyses such as cost-effectiveness or budget impact studies are out of the scope of the UPI analysis. In fact, no economic analyses are planned beyond the initial determination of which treatments have substantial price increases. Given that the economic and clinical sides of the equation will not be directly compared, the UPI analysis is less rigorous than a typical ICER review.

How are stakeholders reacting?

Manufacturers and patient advocacy groups have submitted preliminary comments on ICER’s analysis plan. Concerns center around cautioning ICER on the vagueness of its methodology, the limitations of its restricted focus on drug costs, and possible downstream impacts on patient access to new technologies.

Based on ICER’s responses to these comments, there seems to be some mismatch in understanding the perception and stated intent of this project, as a number of the comments bring up issues that ICER defined in the draft protocol document (ICER 2019). Whether or not the perspectives of ICER and the industry can be reconciled with the release of the final results remains to be seen.

What can you do to engage with ICER?

With the planned silence between now and October’s release of the final UPI report, the most proactive measures can be taken by those manufacturers who have been contacted by ICER regarding their products. For those companies, there is nothing to lose by engaging ICER and providing supportive evidence for the products in question. Even if the chance of convincing ICER is small, it is better to try than to not respond at all and receive a firmly negative evaluation.

ICER’s upcoming report will undoubtedly stoke the flames of debate already lit by ongoing critiques of drug prices. Given the limitations of the report’s planned methodology, which combines a lack of detail in methodology with a lack of reach in scope, it will be worth monitoring to see if the reactions to the report will result in an ongoing series, or a one-off experiment. Time will ultimately tell.

If you need help navigating an ICER evaluation or are interested in learning more about BHE's consulting or analytics solutions, please reach out via the form below.