A Need for Alignment: How ICER's New Cost-Effectiveness Framework Compares with the Second Panel's Recommendations

Methodologists in the HEOR community have been busy over the past 9 months. In September 2016, the Second Panel on Cost-Effectiveness in Health and Medicine published a special communication in JAMA (and subsequent hardcover book) that sought to provide guidance for improving the quality of cost-effectiveness (CE) analyses. A few months later in February 2017, the Institute for Clinical and Economic Review (ICER) presented updates to its Value Assessment Framework, which contains its conceptual approach for conducting incremental cost-effectiveness analyses (CEAs). While ICER’s framework sets to guide their internal modeling efforts and makes no claims to influence general modeling principles, HEOR practitioners throughout the industry may turn to ICER’s framework for guidance especially as the organization gains national attention.

With an increasing need to establish value for healthcare spending, HEOR practitioners should be armed with a unified direction for designing, implementing, and reporting CEAs. This blog aims to compare ICER’s new cost-effectiveness framework with the Second Panel’s recommendations.

A Snapshot of the Similarities and Differences

As experienced economic modelers, we tend to frame the design of our CEAs using several model elements, some of which include: Population, Perspective, Time Horizon, Inputs, Outputs, and Analysis. Our review of the similarities between the Second Panel’s recommendations and ICER’s approach follows this framework. Below is a figure that summarizes my opinion. Model elements labeled with a check(“√”)  indicate similarities, elements marked with a question (“?”)  indicate a mixed bag of similarities and differences, and elements labeled with an "X" indicate inconsistencies. 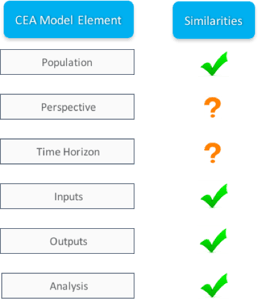 The Similarities: A Detailed Review

We found similarities in 4 of the 6 CEA model elements:

The Second Panel recommends conducting subgroup analyses among subpopulations that may experience differential effectiveness from an intervention. Subgroups may be formed based on: differing baseline clinical risk of an outcome, differing expectations of resource consumption (and cost savings) because of an intervention, and/or differing preferences (health utilities) for the relevant outcomes. Inclusion of subgroup analyses may elicit health benefits and/or greater efficiency of resources in at-risk groups, and thus should be considered. While ICER does not specifically recommend subgroup analyses in their updated framework, the organization routinely incorporates subpopulations in their network meta-analyses and CEAs.

The Second Panel recommends using the Federal Supply Schedule (FSS) for determining the cost paid for drugs by US federal agencies. ICER obtains drug pricing data from SSR Health, which provides pricing net of discounts, rebates, and other price concessions. While the proposed sources differ between the two groups, the conceptual approach is the same.

The Second Panel and ICER recommend that the primary effectiveness measure is quality-adjusted life years (QALYs), leading to an evaluation of incremental costs per QALY gained. In addition to QALYs, ICER proposes to evaluate secondary effectiveness measures such as life years and other clinically-relevant consequences (e.g., strokes averted within atrial fibrillation population).

When determining both value-based price benchmarks and long-term value for money, ICER applies a range of CE thresholds, which is consistent with the Second Panel’s recommendations.

The Mixed Bag: A Detailed Review

We found a mixed bag of similarities and differences in 2 of the 6 CEA model elements:

The Second Panel recommends that all studies report a reference case analysis based on the healthcare perspective focusing on direct medical costs reimbursed by third-party payers or paid out-of-pocket by patients. The Panel also recommends a societal reference case capturing broader effects of interventions, such as: time costs of patients in seeking and receiving care, time costs of informal (unpaid) caregivers, transportation costs, effects on future productivity and consumption, costs to the legal or criminal justice system, the cost of interventions on home improvements, production of toxic waste pollution by intervention, and others. ICER also proposes to maintain the health system perspective as the base case, and perform scenario analyses from a societal perspective focused exclusively on work productivity. However, ICER will not likely consider the other societal impacts raised by the Second Panel, stating issues with finding reliable data inputs.

The Second Panel recommends that the time horizon in a CEA should be “long enough to capture all differences” in health effects and costs between interventions. The Panel indicates that the time horizon will be subject to the intervention and therapeutic/disease area under study, and may include the short term, long term (including lifetime), or one that spans generations (e.g., for an intervention that removes environmental toxins). ICER proposes a more rigid approach, one that focuses on the implementation of a long-term perspective, generally the full lifetime of patients.

Summary: How Well Are They Aligned?

After thorough review of both the Second Panel’s recommendations and ICER’s updated framework, we find that the two approaches share consistent methodologies on most of the CEA elements in our checklist and are therefore relatively well aligned. The HEOR community should find resolution on the two elements found to be a mixed bag so that practitioners can base their CE model design and implementation on a single set of unified principles.