How Does ICER’s Incremental Cost-Effectiveness Analysis Stack Up to Industry Practice?

In early February, the Institute for Clinical and Economic Review (ICER) presented proposed updates to its Value Assessment Framework, based largely on stakeholder feedback received during a public comment period in late 2016. These updates focused on four domains of the framework: (1) comparative clinical effectiveness; (2) incremental cost-effectiveness analysis (CE); (3) other benefits or disadvantages; and (4) contextual considerations. While each domain is important, the incremental cost-effectiveness analysis has proved the most controversial. Since the current comment period is almost up, here’s my review of the updates to the CE framework.

How Does Each Proposed Change Stack Up? 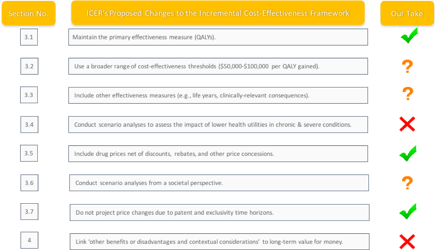 Three of ICER’s proposed updates adhere to industry “best” practices today. These include:

As noted in Section 3.1, the QALY is an industry-approved measure for capturing both the quantity and quality of life years generated by healthcare interventions1, and therefore is a natural output for this framework. In Section 3.5, using undiscounted wholesale acquisition costs would overestimate real-world acquisition costs, so applying drug prices net of discounts is a worthwhile change. Likewise, there is tremendous long-term uncertainty regarding market and pricing dynamics, so limiting price changes due to patent and exclusivity time horizons is a reasonable approach in Section 3.7.

There are also three updates to the new framework that need additional consideration and clarification. These include:

Evaluating an economically-justifiable price based on an incremental CE threshold is a decades-old practice for determining society’s willingness to pay for a new intervention. However, Section 3.2 raises the question as to whether ICER’s lower bound of $50,000 per QALY gained is too low. Based on alternative assumptions and calculations, some experts have indicated this to be the case, and instead have proposed using either $100,000 or $150,000 per QALY gained if a single threshold is desired.2

We mostly agree with the inclusion of effectiveness measures complementary to QALYs in Section 3.3, but caution should be used by ICER. Benchmarks in the literature should be a requirement for comparison to ICER’s incremental cost per consequence output. Without proper and relevant benchmarks, the model output will have no direct comparison, thereby limiting its interpretation.

Similarly, we agree that scenario analyses representing the societal perspective should be assessed in Section 3.6. Yet, ICER modeling teams should carefully consider which populations are most impacted by productivity losses. For instance, in their most recent documentation for the osteoporosis topic, the ICER modeling team indicated that productivity losses would be assessed – in this case, among a starting population of 70-year old postmenopausal women – which is counterintuitive among an elderly population.

Two of ICER’s proposed updates raised significant questions and will hopefully be revised and clarified in the final framework. These updates include:

The rationale behind this update was not clearly stated and raised a few questions that will need to be addressed in the final framework:

This proposed change also raises the issue of sub-group analyses, specifically among at-risk groups (e.g., those with greater disease severity and/or varying patient profiles). Instead of deciding on one scenario analysis that serves as the base case, perhaps sub-group analyses should be conducted in which both scenarios are presented.

As with Section 3.4, I have a few reservations about the new CE threshold estimate proposed in Section 4. ICER indicated that a single incremental CE ratio will be used to determine a value-based price, as well as an overall value rating, for each intervention under study. This means that ICER’s findings could place additional downward pressure on drug prices. The potential impact of this proposed change on pharma stakeholders cannot be overstated or de-emphasized: your products will be judged against the CE ratio benchmark. For a more detailed review of the new CE Threshold, I recommend a quick read of my previous post, ICER’s New Cost-Effectiveness Threshold Raises 5 Major Questions.

ICER has attempted to address hundreds of pages of comments and suggestions in their Value Assessment Framework, and should be lauded for their efforts. However, several proposed revisions to their incremental CE framework require greater clarification and/or adjustment prior to ratification and implementation. We have submitted our concerns, and look forward to seeing them addressed in the revised framework due out April 15th.