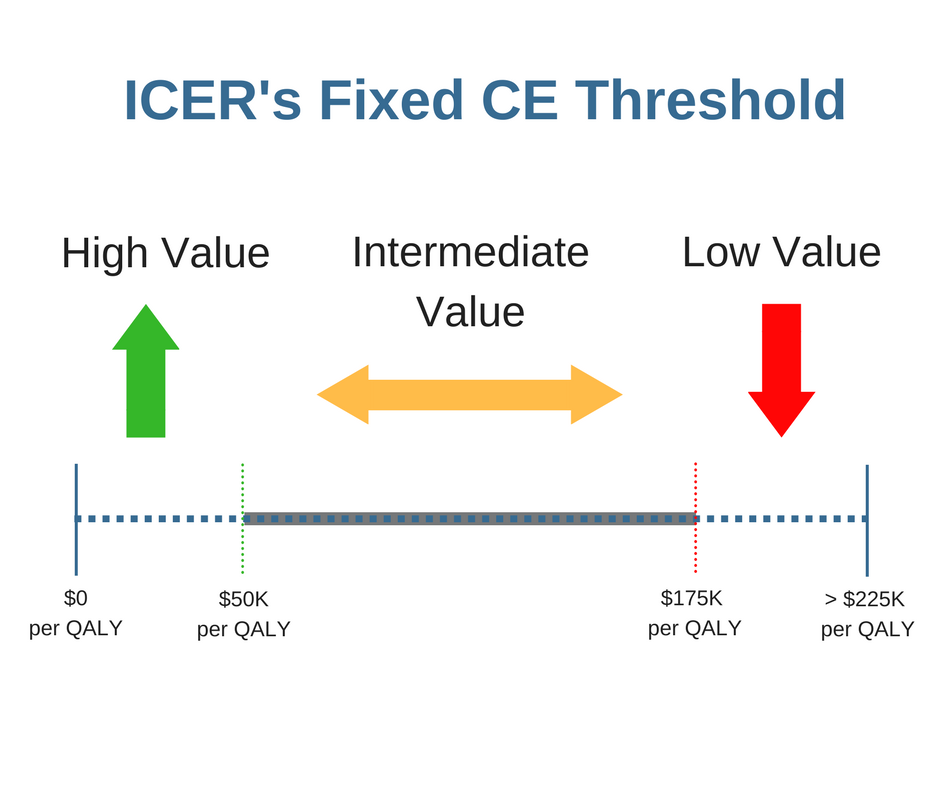 How Committed are ICER and NICE to Basing Decisions on a CE Threshold?

ICER has a high commitment to a CE threshold and bases their evaluation of an intervention’s long-term value for money exclusively on a fixed cost-effectiveness threshold between $50,000 and $175,000 per QALY gained. Key components of ICER’s CE threshold include: 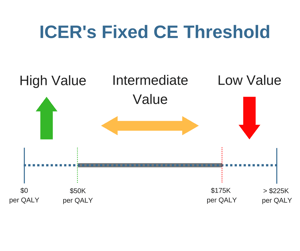 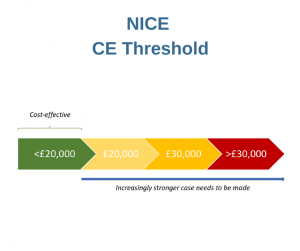 Does ICER or NICE Use a Narrow CE Threshold?

ICER justifies the lower and upper bounds of their CE threshold based on guidance from the World Health Organization (WHO), which suggests a threshold range of 1-3 times the per capita GDP of the country per additional QALY. For the US, this translates to $57,000 to $171,000 per QALY gained, which is in close proximity to ICER’s threshold of $50,000 to $175,000 per QALY gained.

Despite the lack of an official CE threshold, NICE’s range of plausible incremental CE ratios for which an intervention may be cost-effective is actually narrower than ICER’s, even when adjusting for per capita GDP. NICE also does not follow the same CE threshold guidance from the WHO that ICER does. If NICE applied the WHO’s methods, the resulting CE threshold would be approximately £30,000 to £90,000 per QALY gained, which is a stark difference from NICE’s current CE threshold of £20,000 to £30,000 per QALY gained.

Why does a Predefined, Fixed Cost-Effectiveness Threshold and/or a Narrow CE Threshold Matter?

A predefined, fixed cost-effectiveness threshold impacts the recommendations for or against an intervention. ICER, which is highly committed to the use of a CE threshold, does not recommend interventions whose incremental CE ratios fall above the higher bound of their CE threshold. However, it is important to note that ICER’s recommendations for coverage and reimbursement are not legally binding with public or private payers.

NICE, on the other hand, is less committed to the use of a fixed threshold and may still recommend an intervention with an elevated incremental CE ratio, pending the strength of evidence of additional factors for consideration. Although NICE is less committed to a fixed CE threshold, their range of plausible incremental CE ratios for which an intervention may be cost-effective is narrower than ICER’s, potentially making it harder to prove an intervention’s case for coverage and reimbursement when considering NICE’s guidelines.

ICER Versus NICE: Who Cares About A Value-Based Price Evaluation?

To sum up this post, the level of commitment to predefined, fixed cost-effectiveness thresholds, as well as the range of CE thresholds can lead to differences in recommendations between ICER and NICE organizations. Besides the CE threshold, one more critical way that ICER and NICE approaches differ includes evaluations of value-based prices. Stay tuned for my next and final post on ICER’s and NICE’s value-based price evaluations.